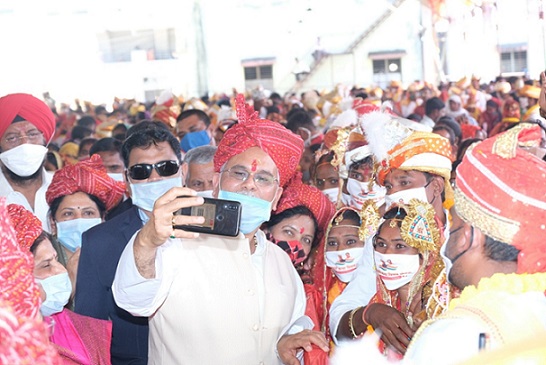 Mass wedding ceremony organized in 22 districts of Chhattisgarh simultaneously: in the wake of pandemic, all the districts participated in the ceremony held in capital city virtually

Chief Minister Baghel extended blessings to all the newly-weds and gave best wishes for their married life. For the first time in Chhattisgarh, mass wedding ceremonies were organized simultaneously organized in 22 districts, under this scheme.

All the districts participated in the function organized at capital Raipur through video conferencing. Chief Minister Baghel interacted with newly married couples of various districts and gave them blessings.

In the ceremony held at Raipur, 233 couples got married, including three Christians and a Muslim couple, who were married as per their religious customs. At the ceremony, Chief Minister symbolically gave away gifts and cheques of financial aid Rs one thousand to five newly-wed couples. On this occasion, many couples captured this memorable moment by taking a selfie with Chief Minister.

Chief Minister felicitated Kamlesh Chopra of Raipur for providing utensils to brides and bridegrooms in mass marriages, and honoured Ankit Gandhi with a memento for providing hand watches and for public cooperation. This mass marriage of three thousand 229 couples organized by Women and Child Development Department in 22 districts has been recorded in the Golden Book of World Records. It was announced by Mrs. Sonal Rajesh Sharma on behalf of the Golden Book of World Records.

While blessing the newly married couples, Chief Minister Baghel said that on the auspicious occasion of Maghi Punni, the bride and groom tied the nuptial knots. It is our privilege to have the opportunity to become both ‘Barati’ and ‘Gharati’ simultaneously. There is no greater virtue than ‘Kanyadaan’, and it has way more significane when done on the day of Maghi Punni.

Baghel said that people are fed up with the wasteful expenditure in weddings. There is also a lot of wastage of means over time. By joining in the mass marriage, the bride and groom along with parents have taken a new step, and I congratulate them for their noble step. Now, along with the state government, mass marriages are being organized in many societies, which is a commendable step. Chief Minister said that under Mukhyamantri Kanya Vivaah Yojana, there was a provision of Rs 15 thousand earlier, which has been increased to Rs 25 thousand. Now a large number of tribal people along with people of various castes, religions are joining in mass marriages.

Addressing the program, Women and Child Development Minister Bhendia said that despite his busy schedule, Chief Minister Mr. Baghel has come to bless all the newly married bride and groom. The event could not be held last year due to Corona. A large number of family members have attended this program today to bless the newlyweds. Under this scheme, state government increased the amount of provisioned financial aid from Rs 10 thousand to Rs 25 thousand, similarly, the incentive for marriage for Divyang couples has also been increased from Rs 50 thousand to Rs one lakh. She also wished the newly married couples a happy new life.

Secretary of Women and Child Development, Shehla Nigar informed that under Mukhyamantri Kanya Vivaah Yojana, target to conduct 7 thousand 600 marriages this year has been set. In this ceremony, a girl from Nari Niketan Raipur got married and joined the mainstream of the society. In view of COVID-19 transition, 22 districts connected via virtual mode. On this occasion, Director of Women and Child Development, Divya Umesh Mishra, Raipur Collector S. Bharatidasan, Departmental officer-employees and relatives of bride and groom were also present.