While presenting Union Budget 2022-23 in Parliament today, Union Finance Minister Smt. Nirmala Sitharaman announced that with advent of Amrit Kaal, the next phase of Ease of Doing Business 2.0 (EODB 2.0) and Ease of Living, will be launched.

The Finance Minister stated that it is the “endeavour of the Government to improve productive efficiency of capital and human resources,” and the Government will follow the idea of ‘trust-based governance’. 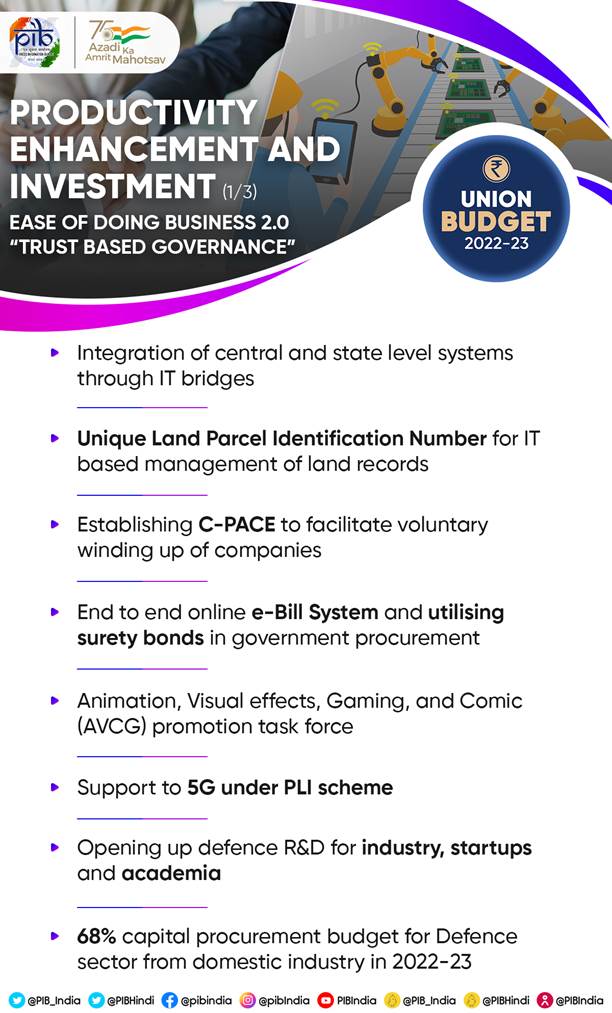 Giving a broad overview of Amrit Kaal, Smt. Sitharaman stated that this new phase will be guided by an active involvement of the States, digitisation of manual processes and interventions, integration of the Central and State-level systems through I-T bridges, a single point access for all citizen-centric services, and a standardisation and removal of overlapping compliances. Crowdsourcing of suggestions and ground level assessment of the impact with active involvement of citizens and businesses will be encouraged, She added.

The Finance Minister stated that as a result of our government’s strong commitment for ‘minimum government & maximum governance’, over 25,000 compliances were reduced and 1,486 Union laws were repealed in recent years. This, she stated, is the outcome of the Government’s trust in the public along with measures such as Ease of Doing Business (EODB).

The Finance Minister proposed to expand the scope of single window portal, PARIVESH to provide information to the applicants. Based on location of units, information about specific approvals will be provided. It will enable application for all four approvals through a single form, and tracking of the process through Centralized Processing Centre-Green (CPC-Green). This portal, for all green clearances, was launched in 2018. It has been instrumental in reducing the time required for approvals significantly.

The Finance Minister proposed that States will be encouraged to adopt Unique Land Parcel Identification Number to facilitate IT-based management of land records as efficient use of land resources is a strong imperative. The facility for transliteration of land records across any of the Schedule VIII languages will also be rolled out.

As a further step to enhance transparency and to reduce delays in payments, the Finance Minister proposed a completely paperless, end-to-end online e-Bill System to be launched for use by all Central ministries for their procurements. The system will enable the suppliers and contractors to submit online their digitally signed bills and claims and track their status from anywhere.

To reduce indirect cost for suppliers and work-contractors, the use of surety bonds as a substitute for bank guarantee will be made acceptable in government procurements, the Finance Minister stated. She said that business such as gold imports may also find this useful. IRDAI has given the framework for issue of surety bonds by insurance companies, She added.

Government rules have recently been modernised for the needs of the Amrit Kaal. The new rules have benefitted from the inputs from various stakeholders. The modernised rules allow use of transparent quality criteria besides cost in evaluation of complex tenders. Provisions have been made for payment of 75 per cent of running bills, mandatorily within 10 days and for encouraging settlement of disputes through conciliation.

Smt. Sitharaman proposed that a animation, visual effects, gaming, and comic (AVGC) promotion task force with all stakeholders to be set-up to recommend ways to tap into the immense potential of this sector to employ youth and build domestic capacity for serving our markets and the global demand.

The Finance Minister proposed that the Centre for Processing Accelerated Corporate Exit (C-PACE) with process re-engineering, will be established to facilitate and speed up the voluntary winding-up of these companies from the currently required 2 years to less than 6 months. The Finance Minister stated that this is in view of the fact that several IT-based systems have been established for accelerated registration of new companies.

As part of the EoDB, Smt. Sitharaman also proposed a scheme for design-led manufacturing to be launched to build a strong ecosystem for 5G as part of the Production Linked Incentive Scheme.

The Finance Minister proposed that defence R&D will be opened up for industry, startups and academia with 25 per cent of defence R&D budget earmarked. Smt. Sitharaman stated that private industry will be encouraged to take up design and development of military platforms and equipment in collaboration with DRDO and other organisations through SPV model. An independent nodal umbrella body will be set up for meeting wide ranging testing and certification requirements, She added.