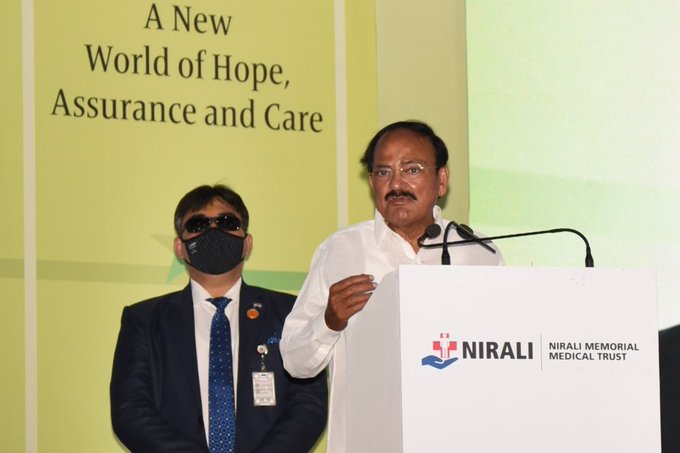 ‘Let us talk about mental health’, says Naidu; need to create awareness on the issue

Naidu calls for a holistic and human-centric approach to healthcare

Delhi, Mar 6
The Vice President M. Venkaiah Naidu on Mar 5 called for bridging the urban-rural disparity in the health infrastructure on a mission mode and appealed to the private sector to try to expand its footprint to semi-urban and rural areas, and provide affordable healthcare to the people. He also suggested to Governments to partner proactively with the private sector to take modern medical facilities to rural areas, particularly the remote regions.

Speaking at the foundation laying of the Nirali Multispecialty Hospital, the Vice President said that COVID-19 pandemic taught a valuable lesson on the importance of good health and observed that a good healthcare system can actually stimulate economic development in a region.

An efficient and affordable healthcare system can “reduce financial burden on the poor, improve worker productivity, reduce absenteeism in schools, and ultimately, have a strong positive correlation with growth”, he added. Good health is thus ‘an asset to the individual, the community, and society at large’, Naidu underlined.

Referring to the tremendous progress achieved by India in health indicators since Independence, the Vice President said there were still significant challenges that demand concerted action. In improving our healthcare system, the private sector, civil society and other organizations must proactively partner with the government, he added.

The Vice President also sought to bring attention to the increasing burden of non-communicable diseases. Noting that lifestyle diseases like cancer, diabetes and heart disease now account for more than 60 percent of the deaths in the country, he underlined the need to create greater awareness among people.

He urged the healthcare experts in the public and private sector to take the lead in initiating a campaign on the health hazards caused by sedentary lifestyles and unhealthy diets.

The Vice President stressed the need to adopt a more holistic and comprehensive view of healthcare. In this context, he quoted WHO’s definition saying “health is not only the absence of illnesses; it is also the ability of people to develop to their potential during their entire lives”.

He suggested that healthcare implies “an effort to stay ‘happy’— physically, mentally and spiritually.” and in line with this approach, he called upon doctors and hospitals to adopt a more human-centric approach to medical care. “Together, this way, we must strive to mitigate humanity’s suffering and spread happiness”, he said.

Before concluding, the Vice President recalled the historic movements of Dandi Salt March and Bardoli Satyagraha, which took place in the region. Noting the global recognition to the Dandi March of 1930, Naidu said it reminded us of the power of Atma Shakti and Atma Nirbharta. He observed that these movements continue to remain as exemplars for movements everywhere in their use of peaceful means to achieve desired goals.

Naidu commended the philanthropic efforts of A.M. Naik, L&T Group Chairman in setting up the Healthcare Campus to serve the people of the region.