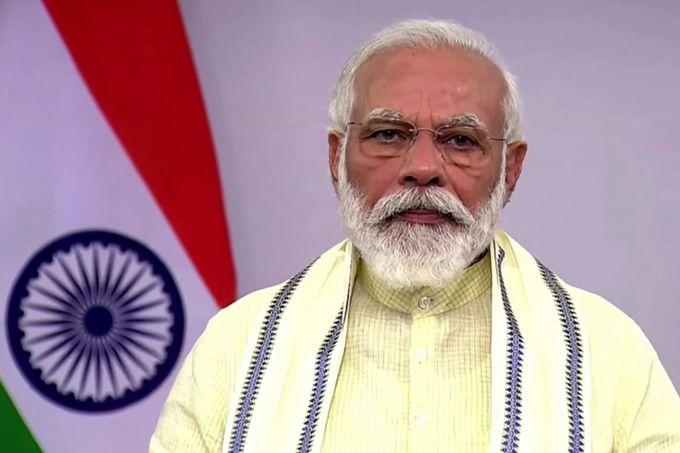 Delhi, Nov 17
Prime Minister Narendra Modi, has said, as the base of the freedom struggle was provided by the bhakti movement, similarly, today, basis of the AatmNirbhar Bharat will be provided by the saints, mahatma, mahants and acharyas of our country.

He was speaking after unveiling the ‘Statue of Peace’ to mark the 151st Birth Anniversary celebrations of Jainacharya Shree Vijay Vallabh Surishwer Ji Maharaj, via video conferencing, today. One of the key highlights of his speech on the occasion was his emphasis on religious and spiritual foundation of the socio-political and economic events like the freedom struggle and the current tryst with the AatmNirbharta.

Reiterating his stress on ‘vocal for local’ Shri Modi said that ‘bhakti andolan’ nourished foundations of the freedom struggle. We need to remember that the people from every nook and corner of the country were inspired and stirred by saints, mahants, sages and acharyas and that raised their consciousness. This consciousness later provided great strength to the freedom struggle, Shri Modi added.

The Prime Minister Modi made a fervent appeal to the spiritual leaders to promote AatmNirbahrta. He pointed out, just as the foundation of the freedom struggle was created and strengthened by the ‘bhakti movement’, today in 21st century, base of the AatmNirbhar Bharat will also be prepared by our saints, mahants and acharyas. He requested them to relentlessly preach the message of ‘vocal for local’ wherever they address their disciples or spiritual gatherings. The message of ‘vocal for local’ will gain in strength with the endorsement of the spiritual leaders. This will inspire the nation for Aatmnirbharta as it electrified the country during the freedom struggle, Shri Modi said.

Total FDI inflow of US$ 58.37 billion received during April to...