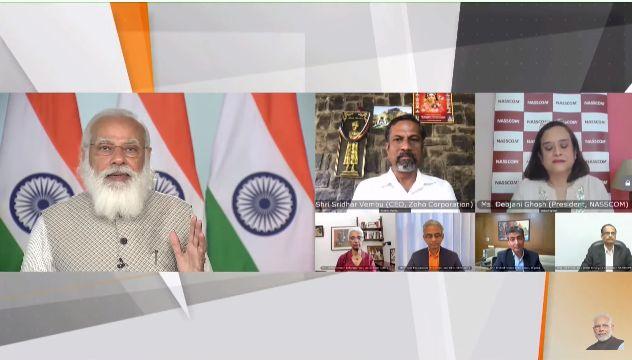 When the chips were down, your code kept things running, PM tells IT Industry

Government is working to free the tech industry from unnecessary regulations: PM

Young entrepreneurs should have the freedom to leverage the new opportunities: PM

Speaking on the occasion, the Prime Minister lauded the IT industry for their resilience during the Corona period. “When the chips were down, your code kept things running” said the Prime Minister. He noted 2 percent growth in the sector and addition of 4 billion dollars in revenue amidst the apprehensions of de-growth.

The Prime Minister noted that today’s India is eager for progress and the Government understand this feeling. He said aspirations of 130 crore Indians inspire us to move forward with rapid speed. He emphasized that expectations related to the new India are there from the private sector also as they are from the government. He said that the Government is aware that restrictions are not conducive for the development of the future’s leadership. The Government is working to free the tech industry from unnecessary regulations.

The Prime Minister listed the steps taken in recent times such as National Communication Policy, policy to make India Global Software Product Hub and Other Service Provider” (OSP) guidelines which were issued during Corona period. He noted that inclusion of Information services into 12 champion service sectors has started bearing fruit. Recent liberalization of maps and geo-spatial data will strengthen the tech start up ecosystem and the wider mission of Aatmnirbhar Bharat. .

The Prime Minister emphasized that young entrepreneurs should have the freedom to leverage the new opportunities. The Government has full faith in the start up and innovators, said the Prime Minister. Steps like self-certification, use of IT solutions in Governance, data democratization through Digital India have taken the process forward.

Talking about centrality of transparency in Governance, the Prime Minister noted people’s growing trust in the government. He said that governance has been brought to dashboard from the files for proper monitoring by the citizens. He also mentioned improvement in process and transparency in Government procurement through GeM portal.

The Prime Minister stressed the need for use of technology in governance. He gave examples of geo tagging of infrastructure products, houses of poor and such projects so that they can be completed on time. He talked of use of drones in mapping village households and reduction in human interface to improve transparency especially in tax related matters. The Prime Minister called upon the start-up founders not to restrict themselves to just valuations and exit strategies. “Think how you can create institutions that will outlast this century. Think how you can create world class products that will set the global benchmark on excellence”, the Prime Minister said. The Prime Minister also asked the tech leaders to emphasize imprint of Make for India in their solutions. He called upon them to establish new parameters of competiveness to maintain momentum and Indian technological leadership. He also emphasized culture of excellence and institution building.

The Prime Minister, asked them to think about giving world class products and leaders in the run up to 100 years of Independence in 2047. Decide your goals, Country is with you, said the Prime Minister.

The Prime Minister said that it is the responsibility of the tech industry to give proactive technological solutions for 21st century challenges to India. He asked them to work for solutions in water and fertilization requirement of agriculture, health and wellness, tele medicine and education and skill development. He said steps like National Education Policy and Atal Tinkering labs and Atal Incubation Centre are promoting skilling and innovation and need industry support. He also called for paying attention to the outcomes of their CSR activities and pushed for focusing the activities towards backward areas and digital education. He also drew attention to the opportunities that are emerging in tier-2 and tier-3 cities for entrepreneurs and innovators.