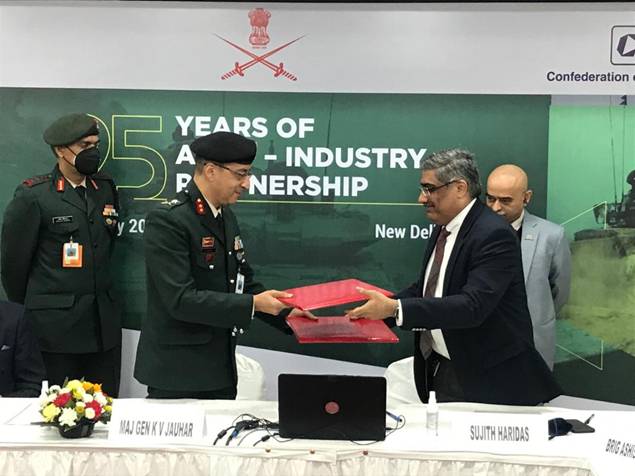 Delhi, Jan 22
An MoU between the Indian Army & Society of Indian Defence Manufacturers (SIDM) was signed on 21 January 2021 to provide further impetus to indigenisation under the Hon’ble Prime Minister’s vision of ‘Atmanirbhar Bharat’ and to achieve strategic independence by reducing dependence on foreign origin equipment. This MoU was signed on the occasion of 25 Years of Army-Industry Partnership with Confederation of Indian Industry (CII). Collaboration between the Indian Army and industry started in 1995 with the indigenisation of spares and has progressed to major defence platforms and a wide range of weapons and equipment.

Increasing security challenges due to India’s rising stature in the international community, apart from unresolved borders and revisionist adversaries require continuous and concerted capability building of the Army through modernisation to address them. This can be done by equipping the Army with indigenously built equipment. In order to optimise capability building and single contact with the industry, Indian Army has reorganised itself by aligning both the revenue and capital routes of procurement under Deputy Chief of Army Staff (Capability Development & Sustenance). Army Design Bureau (ADB) has been established to act as a direct facilitator with the industry and thereby connect the defence manufacturers directly with the user. These changes have resulted in a collaborative engagement between the technology provider, the equipment manufacturer and the user.

The Government has made necessary policy changes to support indigenisation and achieving self-reliance in defence sector with the active support from the Army. Industry associations have provided a common platform for industry to interact with Indian Army to showcase their expertise. The inputs of industry go a long way in effecting policy modulation and changes. With the signing of MoU with SIDM, Indian Army has reiterated it’s firm resolve towards achieving self-reliance by supporting and handholding indigenous defence industry.