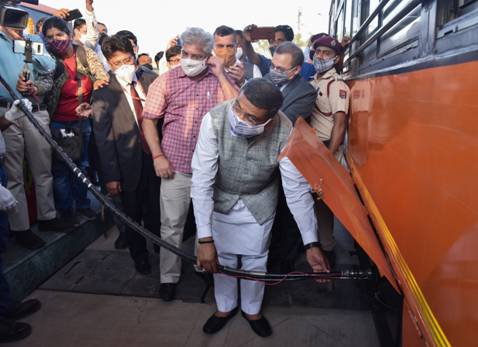 In India’s quest to promote Hydrogen as a clean fuel for the mobility sector, Hydrogen-blended HCNG is emerging as an excellent interim technology for achieving emissions reduction and import substitution. Refueling of H-CNG blends in vehicles can be performed with minimum modifications in the infrastructure that is currently under use for dispensing CNG.

Kailash Gahlot, Minister of Transport, Government of Delhi, was also present on occasion.

Speaking on the occasion, Pradhan said that providing clean and reliable energy supplies to 130 crore plus Indians is the top most priority of the Government. He said that India will emerge as a winner in developing the solutions, the world would admire for the decades ahead. The Minister mentioned that Prime Minister Narendra Modi is committed to usher in clean energy future that has minimal impact on the environment.

Complimenting the initiatives of Indian Oil, the Minister said, “I am happy to note that the scientists of IndianOil R&D have risen to the occasion and have developed an innovative compact reforming technology for production of Hydrogen-mixed CNG.”

Elaborating on the importance of Hydrogen in facilitating India’s energy transformation, Pradhan mentioned, “Hydrogen is the ultimate fuel, which, while giving energy, produces clean water in the emissions. Apart from this, it has many other virtues as the capacity to get the rural sector involved with the energy sector through biomass”.

The Minister said that this pilot project will be unique. It will help the county and the world as a whole.

Transport Minister of Delhi Kailash Gahlot appreciated Indian Oil’s efforts to develop such a path breaking technology not only for the first time in India but in the entire world. He said that this project has been executed in cohesive environment involving Indian Oil, IGL, DIMTIS, DTC and Delhi Transport Department.

He assured of Delhi Government’s full cooperation for the successful completion of the trial, so that this fuel can be commercially adopted soon on pan Delhi and India basis.

Gahlot complimented the team work of all stakeholders. He spoke about its usage not only for DTC buses but also for private buses, once its trial is over.

The Secretary, MoPNG, Tarun Kapoor said that HCNG is the fuel of the future. He said that HCNG is produced in much way all over the world but its commercial viability is the main challenge. Kapoor mentioned that production of HCNG in India would be very cheaper and this will reduce the burden over Gas imports.

Speaking on occasion, S M Vaidya-Chairman-Indian Oil, said that the latest technological development would augur well with the nation’s vision & commitment to transit towards the hydrogen economy.

Talking about Indian Oil’s pioneering work in hydrogen research,Vaidya said, “Indian Oil took early steps in promoting Hydrogen initiatives. We also launched a research program on HCNG alongside the Society of Indian Automobile Manufacturers (SIAM) and MNRE. IndianOil has set-up two Hydrogen and HCNG dispensing stations: one at our R&D campus in Faridabad and another at our retail station at Dwarka, Delhi”. He expressed hope that more partnerships will be formed.

An audio video film was also shown on the occasion. The message of Bhure Lal, Chairman Environment Pollution (Prevention & Control) Authority for the National Capital Region (NCR) was also played on the occasion.

In India’s continuous quest to use hydrogen as a fuel for the mobility sector, hydrogen blended CNG (commonly called H-CNG) has emerged as an excellent interim fule for achieving emission reductions and import substitution. The existing IC engine without any significant modification can be run on H-CNG and with minimal infrastructural upgrade, the existing CNG dispensing refueling infrastructure can be used to deliver H-CNG blends as well.

H-CNG blends can be produced directly from CNG, bypassing the energy-intensive electrolysis process and high-pressure blending costs.
The flexible and robust process allows the production of H-CNG on-site, in less severe conditions, and under low pressure
It provides a higher yield H-CNG mixture by up to 4% to 5% compared to CNG’s input quantity.
The cost of H-CNG production by the above process is about 22% cheaper than conventional physical blending.