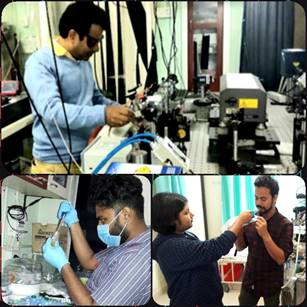 Scientists find new Breath Print: Exhaled breath may soon help detect bacteria that infect the stomach, causing various forms of gastritis and eventually gastric cancer. Scientists have found a method for early diagnosis of bacteria that causes peptic ulcer, with the help of a biomarker called ‘BreathPrint’ found in the breath.

Dr Manik Pradhan and his research team at S. N. Bose National Centre for Basic Sciences, Kolkata, an autonomous institute of the Department of Science & Technology, Government of India, has recently spotted the new biomarker for diagnosis of Helicobacter pylori in semi-heavy water (HDO) in human exhaled breath. The team has used ‘study of different water molecular species in human breath, also called ‘Breathomics’ method to explore different water isotopes in human exhaled breath. This work, funded by the Technical Research Centre (TRC) supported by the DST, was recently published in the journal ‘Analytical Chemistry’ of the American Chemical Society (ACS).

Helicobacter pylori, a common infection which may turn serious if it is not treated early, is usually diagnosed by the traditional and invasive painful endoscopy and biopsy tests which are not suitable for early diagnosis and follow up.

Our gastrointestinal (GI) track plays a crucial role in water metabolism in the body. Water exists in nature as four isotopes. It is believed that any kind of impaired or unusual water absorption in our GI track may be associated with various gastric disorders or abnormalities like ulcer, gastritis, erosions and inflammation. But so far there has been no clear experimental evidence to support this.

Experiments by the team has shown direct evidence of unique isotope-specific water-metabolism in the human body in response to the individual’s water intake habit. They have shown that the different isotopes of exhaled water vapour are strongly linked with various gastric disorders during the process of human respiration.

The team has already developed a patented ‘Pyro-Breath’ device for diagnosis of various gastric disorders and H. pylori infection, which are under the process of technology transfer.