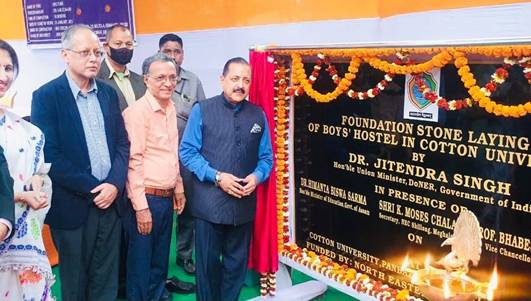 Delhi, Feb 25
Union Minister of State (Independent Charge) Development of North Eastern Region (DoNER), MoS PMO, Personnel, Public Grievances, Pensions, Atomic Energy and Space, Dr. Jitendra Singh said here that the new National Education Policy is both progressive as well as pragmatic. He said, once implemented, it is going to be a game changer and its positive outcomes will reflect in the next generation.

Dr. Jitendra Singh was addressing a function after laying the Foundation Stone of new Students’ Hostels in the premises of the famous Cotton University which is an extension of the erstwhile Cotton College, the very first Degree College to be established in Northeast in 1901 during the British Raj and named after the then British Governor Mr. Cotton. The entire cost of the construction of the seven storeyed hostel buildings will be borne by the North Eastern Council(NEC), affiliated with the Ministry of Development of North Eastern Region (DoNER) and for this purpose an amount of around Rs.40 crore has already been allocated.

Dr. Jitendra Singh said, the Ministry of DoNER and the North Eastern Council have over the last six years diversified their activities beyond infrastructural projects and are hugely contributing to education and health sector. He referred to Northeast Girls Hostels constructed two years back by the North Eastern Council in the premises of the Bangalore University and the under construction Northeast Students Hostel, the work on which is in progress in the premises of the Jawaharlal Nehru University (JNU), New Delhi.

Similarly, in the health sector, Dr. Jitendra Singh said the North Eastern Council has in collaboration with the Department of Atomic Energy and Tata Memorial Cancer Hospital Mumbai, upgraded the Dr. B Borooah Hospital in Guwahati and turned it into a Super Speciality Cancer teaching hospital with introduction of DM Oncology and MCh Oncology courses.

Referring to the new National Education Policy brought by Prime Minister Narendra Modi, Dr. Jitendra Singh said, it incorporates certain revolutionary provisions which are in tune with the requirements of global India. For example, he said, the provision of entry and exit out of an Education Institution which will allow the student to quit his study course depending on his aptitude with an option to come back and join the course at a later time. This is also going to be a great facilitator in nurturing and grooming the young talents and aptitudes which sometimes remain underutilized, he added.