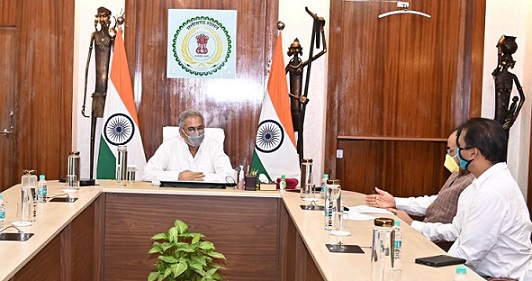 Youngsters to be provided training in poultry farming and fishery

Poultry industry in Chhattisgarh: Chief Minister Bhupesh Baghel said that Chhattisgarh Government will extend every possible support to promote poultry industry in the state. He said that there is a considerable scope of poultry farming and fishery in the state. These trades are associated with agriculture. To encourage youth towards this sector, they would be provided training poultry and fishery.

Chief Minister said that farmers are being provided better value for their crops in the state. Besides, the farmers are also being financially aided under Rajiv Gandhi Kisaan Nyay Yojana. Youth in farmer families can utilize these funds for going ahead in poultry farming and fishery business.

Chief Minister was having the aforementioned discussion with the delegation of Chhattisgarh Poultry Farmer Association at his residence office. Industry Minister Mr. Kawasi Lakhma was also present on the occasion.

During the discussion, Delegation members informed Chief Minister that chicken manure is in demand for mushroom production, as it is rich in nitrogen. Making arrangements for certification of chicken manure can help in earning better profit out of it.

Office-bearers of the association told Chief Minister that 90% of the poultry farms in the state are of small-scale, and these poultry farms have suffered losses due to corona crisis. It would be a great support to the poultry farmers if State Government provide them concession in electricity bills.

Chief Minister assured them of considering the proposal on a serious note. In response to another demand, Chief Minister said that if consumption of corn and soyabean increases in the poultry industry, then initiative would be taken to expand the farming area of these crops.