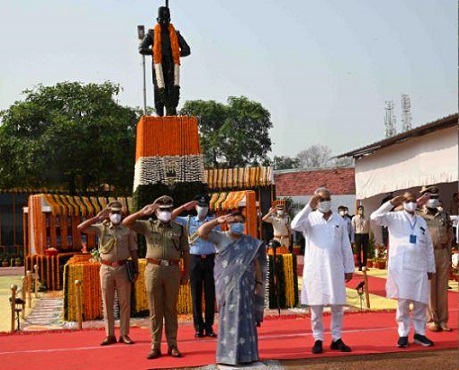 Police personnel risk their lives: Police Commemoration Day is the occasion to take pride in the noble sacrifices of police personnel for nation and also to mourn the loss of our brave fellowmen: Chief Minister Baghel

Police personnel risk their lives and brave the odds to keep us safe. This is the day to remember the legends of these brave jawaans, who sacrificed themselves for protecting their motherland, said Governor Anusuiya Uikey while paying tribute to the martyrs today, at Fourth Battalion CAF Mana Raipur premise, on the occasion of Police Commemoration Day.

Governor Uikey said that Police personnel sacrifice their lives to keep us safe. We sleep in peace at our home because police remains vigilant all night, patrolling the area. During covid crisis, I noticed that despite the uncertain and fearful environment, our police personnel performed their duties. Some of the personnel got infected, some even lost their lives to this pandemic, but it did not dampen their courage, they went on to perform their duties despite the odds.

Uikey further said that our state is struggling with the problem of naxalism. Police personnel posted in these areas brave the naxalites tactfully and courageously. They not only create awareness on importance of development in these areas but also inspire people to join the mainstream. With their efforts and dedication, the state would soon get rid of the problem of naxalism.

On the occasion of Police Commemoration Day, Chief Minister expressed gratitude towards the martyrs and empathized with their families. He said that this is not only the occasion of taking pride in sacrifice of martyrs but also the time of mourning the loss of our brave companions.

He said that the chapter on the encounter with the Chinese army in Ladakh on 21 October 1959 is recorded in golden letters in the history of might and valour of the security forces. Police Commemoration Day is observed on 21 October every year to commemorate the martyrdom of the brave soldiers of the security forces in that encounter. Our soldiers deployed in Naxal-affected areas deal with the Naxalites with utmost understanding and courage, to protect civilians round the clock. Recently, affected by the rehabilitation policy of the Chhattisgarh government, the Maoists are continuously surrendering. As a result, Naxalite activities have decreased by 47 percent in the state.

Director General of Police Mr. DM Awasthi said that many parts of the country are Naxalism-affected, which includes a part of Chhattisgarh as well. Maoists are actively conspiring against humanity and democratic values. Chhattisgarh Police is committed to eradicate the problem of naxalism. Our jawans are facing this challenge with fearlessness, indomitable courage and patience, under severe conditions. In Chhattisgarh, from 01 September 2019 to 31 August 2020, police personnel have killed 47 Naxalites in encounter. In this decisive battle, 25 soldiers of Chhattisgarh Police were martyred in past one year. We are confident that the sacrifice of brave soldiers will not go in vain. On this occasion, Additional Chief Secretary of Home and Jail Department Subrat Sahoo and senior officers of police, families of martyred soldiers were present.

It is our responsibility to protect constitutional rights of citizens: CM Baghel

It is our responsibility to protect constitutional rights of citizens: CM...