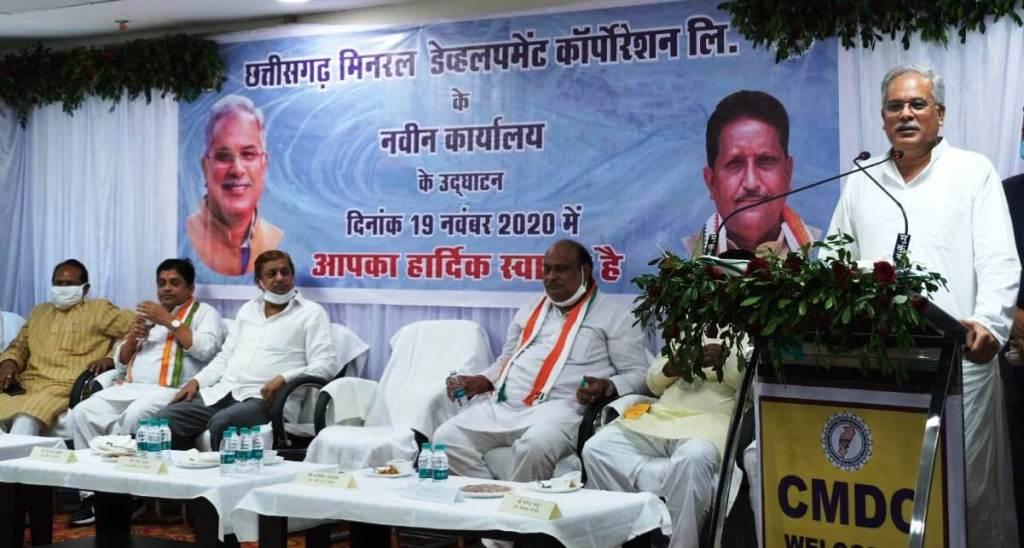 Chief Minister Bhupesh Baghel said that CMDC has a big responsibility of utilizing mineral resources for economic growth of Chhattisgarh and people here. CMDC should try to establish as many industries as possible for mineral based value addition, so as to increase revenue of the state and generate as much employment as possible. Chief Minister Mr. Baghel was addressing the inaugural programme of the new office of CMDC in Sector-24 of Nava Raipur on Nov 19.
Forest Minister Mr. Mohammad Akbar presided over the programme. School Education Minister Dr Premsai Singh Tekam, Food Minister Mr. Amarjeet Bhagat, Revenue Minister Mr. Jaising Agrawal, Urban Administration Minister Dr Shiv Kumar Daharia, MLA Mr. Dhanendra Sahu, Food Civil Supply Corporation Chairman Mr. Ramgopal Agrawal were present in the programme as special guests. CMDC Chairman Mr. Girish Dewangan welcomed the guests at the programme.
On the occasion Chief Minister said that State Government has done more than 50 MoUs for establishing new industries, which would lead to capital investment of nearly Rs 45 thousand crore in the state. Biggest challenge for CMDC is to ensure continuous supply of raw material to these mineral based industries efficiently.
Chief Minister said that Chhattisgarh is blessed with mineral wealth. Now it is our responsibility that the benefits of this mineral wealth reach to 28 million people of the state. Referring to the iron ore Aridongri project, Chief Minister said that CMDC should make efforts to make pallets from the iron ore found here, to increase the revenue of the state by value addition. Chief Minister also referred to new projects of CMDC. He emphasized the need for progress in the work of Deposit 4 and Deposit 13 of Bailadila, and directed to make efforts to acquire new coal blocks and to expedite the exploration of new areas of tin ore collection. He said that an MoU has been done for the aluminum plant in Surguja area, its work will start soon. Mr. Baghel said that minerals like coal, iron ore, dolomite, limestone, diamond, uranium are abundantly found in Chhattisgarh. This wealth should be utilized for the development of the state.
Mr. Baghel said that after the formation of the new government, efforts were made to provide education, health, employment in the mine areas with the help of DMF. State Government made efforts to provide better health facilities in Bastar region. He said that 105 schools which were closed for 13 years were re-started in Sukma district, 13.87 percent of the children have been cured of malnutrition under Chief Minister’s Suposhan Abhiyan, a record. Through Schemes like Haat Bazar Clinic, doctors were appointed in Bastar area. Today there are 22 doctors in Jagdalpur while 26 doctors are working in remote district like Bijapur. The result of better health facilities was that even after 200 percent rainfall last year, not a single case of diarrhea or vomiting was reported in Bastar region .
Presiding over the program, Forest Minister Mr. Mohammad Akbar said that the mineral wealth that nature has given to Chhattisgarh. In view of this, there is a lot of scope for Chhattisgarh Mineral Development Corporation to work on. He hoped that the Mineral Development Corporation would play its important role in the development of the state. Addressing the program, Chairman of Chhattisgarh Mineral Development Corporation, Mr. Girish Dewangan said that CMDC will make every effort to utilize mineral resources in the development of Chhattisgarh. It will be the endeavor of CMDC to ensure smooth supply of raw materials to the mineral based industries and provide more employment opportunities to the people in the industries. He said that CMDC will work step by step with the state government to realize the dream of Garhbo Nava Chhattisgarh. Secretary of Mineral Resources Department Mr. Anbalagan P. said that Chhattisgarh is the leading state in the country in the production of minerals. Chhattisgarh ranks first in coal production. Managing Director of Chhattisgarh Mineral Development Corporation, Mr. Sameer Vishnoi, while presenting the report of Mineral Development Corporation, gave information about the corporation’s projects.

No proposal under consideration for allotment of any area of state on franchisee: Chairman