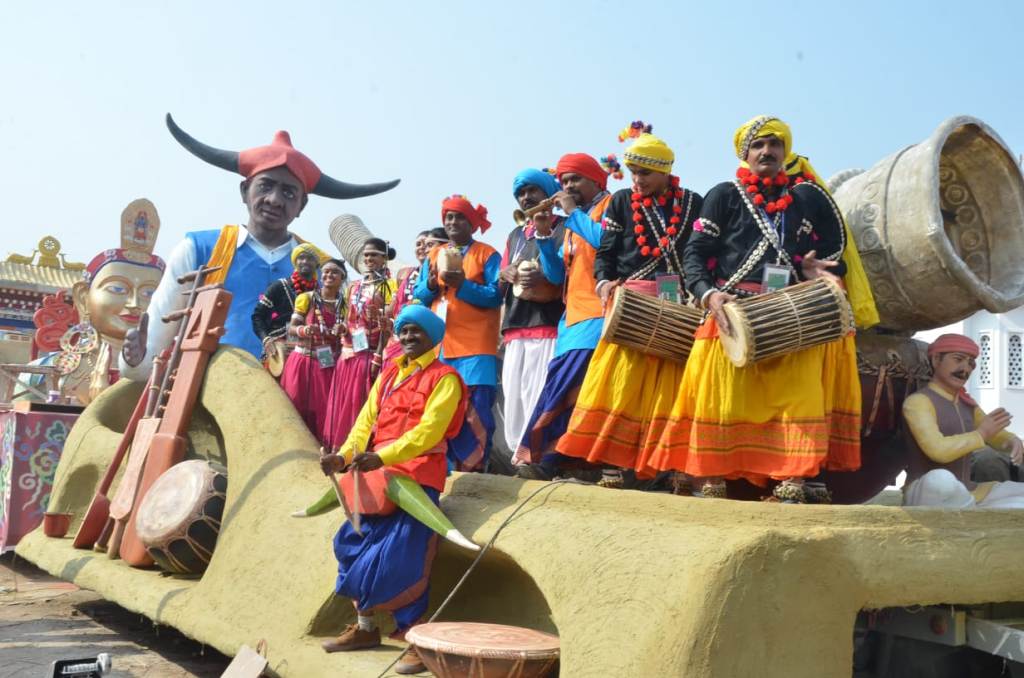 Chhattisgarh’s tableau depicting ‘folk musical instruments of Chhattisgarh” is all set to roll at Rajpath during the Republic Day celebrations here. This tableau created by Public Relations Department of Chhattisgarh Government was showcased today to the national media by Defence Ministry, during a press preview at R R Camp in New Delhi.
Dancers, who will be accompanying the tableau, also performed ‘Mandri’ dance in front of the media. A team of artisans and officials of the Chhattisgarh Public Relations Department had been working round-the-clock at the camp site for one month for the final rollout after the tableau was selected for the Republic Day parade, 2021.

The front-side of the tableau beautifully depicts a giant model of a tribal woman playing “Dhankul” musical instrument, made from objects used in day-to-day life such as earthen pot, bow and bamboo cane. This instrument is used on the occasion of special rituals in Bastar division such as ‘Teeja-jagaar’ and ‘Laxmi-jagaar’. The middle portion depicts musical instruments ‘Todi’ and ‘Tuhri’, which are played on auspicious occasions by blowing air into it. Bastar’s ‘Gaur’ dance is displayed on ‘Todi’, female dancers carrying a special instrument called Gunja, which is an iron rod with iron bead on top are also shown. In the rear part, a male playing a drum while performing ‘Gaur’ dance is being displayed. On both the edges of the tableau, dancers performing dance and playing various rhythmic instruments are depicted. Other instruments displayed on the tableau are ‘agalgoja’, ‘copdodka’, ‘maandar’, ‘dev nagada’, ‘daahak’, ‘nagada’, ‘dafadaa’, ‘sarangi’, bamboo etc.
Out of 28 states and 8 Union Territories, only 17 states, including Chhattisgarh will be able to take part in Republic Day parade. The tableau will give international recognition to the folk musical instruments of Chhattisgarh and people across the world will be able to know about the unique and affluent culture of Chhattisgarh.

Baghel inspected vaccination system at Raipur Medical College, interacted with people who had come for vaccination

RTPCR testing facility to be started in airports and railway stations: CM Baghel