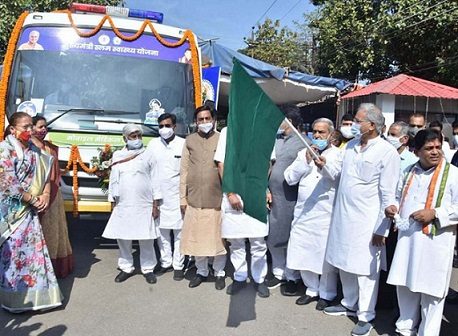 This pilot project under Chief Minister’s Urban Slum Health Scheme has been started to provide medical treatment facility to women from female doctors. Chief Minister flagged off three special mobile Dai-Didi Clinic under the pilot project for Raipur, Durg-Bhilai and Bilaspur Municipal Corporation. Chief Minister took a tour inside the mobile clinic and got his blood pressure tested. In this Dai-Didi Special Clinic, only female doctors and female medical staff would be appointed and treatment facility would be provided free of cost.

On the occasion, Chief Minister Mr. Baghel said that Dai-Didi clinic is the first of its kind scheme in the country which is entirely dedicated to provide medical treatment facility to women. At present, it has been started as a pilot project under Chief Minister’s Urban Slum Health Scheme, whic and it would be expanded in future. Chief Minister said that women often hestitate to talk about their health problems, but with female doctors and female medical staff at Dai-Didi Clinic, women would be able to comfortably talk about their health problems and avail the treatment free of cost. Chief Minister requested women to get maximum benefit from this clinic.

It is worth mentioning that along with the first aid facility for women, Dai-Didi clinic would have an additional facility for breast cancer screening by women doctor, self breast examination of the beneficiaries, regular and special screening of pregnant women etc. This clinic will be set up in slum areas on a predetermined day near Anganwadi in the cities, in collaboration with the Women and Child Development Department. In addition, benefits of various beneficial projects of Women and Child Development Department for pregnant women, children etc. will also be provided.
Due to the unavailability of separate screening room and counselors in general clinics, women feel embarassed to talk about family planning tools, copper-T insertion, availability of emergency pills, birth control pills, weekly contraceptive pill, contraceptive injection, family planning counseling, STD counseling Does. But now with the availability of dedicated female staff in this women’s clinic, such consultations will be more comfortable for women.